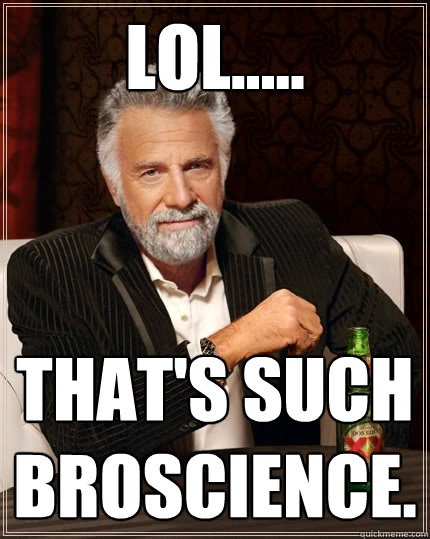 Bro-Science and the Death of Common Sense in the Gym

“Bro-Science” – if you’ve spent any time on a bodybuilding or fitness related forum you’ve probably heard the term. I know I’ve been using it for at least the last decade, and at this point I don’t even remember who I first heard it from. Bro-science is a term used to describe the type of “Scientific discussions” that happen at the gym when someone is hanging out with their fellow gym goers – or, their “bros.” You may have overheard some of these conversations in the locker room where someone is talking about this new special exercise that is going to make their biceps grow 2” in a month, or a new supplement that is going to get them “ripped and shredded” by the end of the month.

So why did I put quotes around “Scientific discussions” in the preceding paragraph? That is quite simple; it is because AT LEAST 75% of the time there is no actual “science” involved. Now, don’t get me wrong, there are plenty of people out there that do a lot of research and study these things so they can make intelligent informed decisions. Those aren’t the bro-scientists we are talking about. Also – don’t let the term “bro” confuse you, there are plenty of female bro-scientists out there as well… maybe even more than males because those “lady magazines” are filled with pseudo-scientific BS that people take as fact just because it is printed. Many bro-scientists don’t know that they are full of crap, they honestly believe that what they are spreading around is true scientific fact – and that is the truly sad part because a little research, rather than just believing the latest ad for Mega-Ripped 4,000,002 would stop the perpetuation of gym mythology!

Why does bro-science happen? That is actually pretty easy to answer: bro-science happens because everyone that works out, at least for a short time when they first start out, truly believes that there is a shortcut out there. We all start out believing that if we can just find the right set of exercises and the right supplements – we will suddenly and instantly be able to run a marathon in 2 hours, be able to squat 900lbs, be able to shed 40lbs of body fat in 3 weeks, or gain 30lbs of pure muscle in a month. It is this hope and dream of finding the “easy way out” that leads bro-scientists to come up with their “theories” and “science.” It isn’t until you have worked your butt off that you will realize that, unless you are genetically blessed, there is no easy way to reach your goals.

Where do they get their information? That is a little more complicated, because there is no one definitive source of information that creates a bro-scientist. Most bro-scientists start out with the intention of learning as much as possible and becoming educated on how the body works. The problem is that many don’t know where to go to get good information. They start out by reading some basic information on physiology and anatomy – realize that it can be a bit overwhelming – and start surfing the web looking for answers. Many bro-scientists that I have heard preaching sound as if they got most of their information from supplement ads. This is a big hazard because supplement companies love to use pseudoscientific terminology that makes their product sound fancier and more high tech than their competitors. They love to tout things like “It will give you massive pumps!” and “You’ll feel the tingle in minutes!” Bro-scientists look at these ads and think that they NEED those things to get a good workout. Sometimes they take a good concept, misunderstand how it works, and spread around their interpretation of it. You can see that with runners and carb loading – I know I was guilty of it back “in the day” when I was a distance runner. I had heard of carb loading… so my friends and I decided that meant right before the race, after our warmup run, we would down a CarboForce drink and try to eat a Powerbar. That was never a good idea – we almost always felt like crap during the race, but we believed we knew what we were doing… had no idea we were bro-scientists! Another source of bro-science is “the big guy at the gym” or the “fastest runner in the race”. Most beginners assume that the top athletes in their chosen field must be the most knowledgeable – so they take any advice they can find and run with it… repeating it to everyone they see. The problem here is that many times, even though they had to work hard to get to where they are, the top athletes are “genetically gifted” and would get bigger/stronger/faster no matter what they do!

So we know that many bro-scientists have no idea they are bro-scientists – in fact they usually think that the information they are sharing is truly scientific! What do we do about it? Great question – and short of taking classes in Exercise Science, Human Physiology, and Kinesiology there isn’t a real clear cut solution! The best thing to do, and the way to bring common sense back into the gym is to always question anything you hear that sounds like an “easy way out”. Do a little research on that special new workout program that will make you drop pounds of body fat while making you into the fastest runner in the world in just 4 weeks. Question that supplement that is going to make you gain superhuman strength the first time you take it. Question how wrapping saline soaked cloths around your waist is going to make your body lose fat. Always ask “Why would that work?” when someone tells you about something that is too good to be true.

Don’t be a bro-scientist! Leave the pseudoscience to the advertisers, and do your own research. Your body will thank you, and you will make the best gains of your life when you use your own brain!

*NOTE: this was originally written in 2014… if you Google Bro Science these days you’re going to find Dom Mazzetti’s hilarious site and videos – we love that type of bro science! 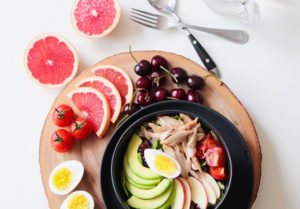 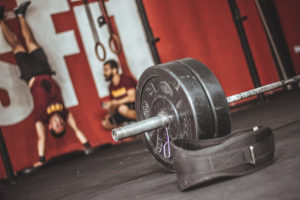 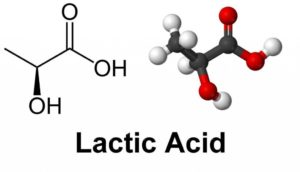